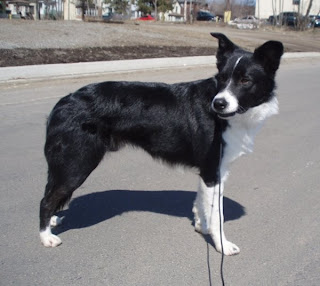 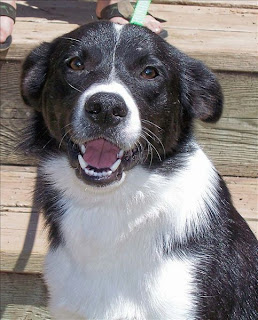 This is a very sad story from the dog world....if you have or see Benny, please have a heart and help him get home.
========================================================
Benny is a Black and White, Smooth Coated, Border Collie, in athletic condition. He is running "naked" ( NO COLLAR). He has tattoos in BOTH his ears. One tattoo is his registration tattoo with the CBCA and it is ST9R. He also has the tattoo BDBC and in the other ear is 0516. Benny is completely friendly he will come for, pets, food or a game.
Benny is approximately 40-50 lbs, white back feet, tipped tail, and is white to the elbows in front. He has a thin white blaze, white chest and white around the neck "collar". He is not neutered, and is registered with the CBCA as BRILDWNS XANDER.
On Tuesday, March 18, at approximately 11:00 AM he disappeared from 401 Hwy 11/17 Dorion, Ontario CANADA. Benny does not take off so I suspect that someone pulled in and called him to them and drove off with him. It is possible that he did escape the fence and and wander off only to be picked up or even that he escaped and is running home to me here in Thunder Bay from Dorion.
Contact information for Benny's rightful owner is available on the kennel's blog, Bellaclan Border Collies.
Posted by Social Mange at 9:01 AM No comments: Links to this post

I hate child pornographers and abusers as much as anyone, and have some humble opinions about what we could use them for...vivisection comes to mind...but trying to legislate responsibility and morality is useless. If a person doesn't have the ethics and morality that would cause them to report child pornography on their own, no law of any kind is going to cause them to report it.

The Fibs are on another rampage of feel-good sound-bite do-nothing law. This is another of Laurel Broten's flicking ideas. Can't wait to see how any charges under this law gum up the already gummed-up court system.

Peter Kormos has sensibly pointed out major flaws in this new Fiberal "initiative". And why is Broten referring to the experts? The Fibs ignored experts in the past, when they ignored all the canine experts who advised that breed-specific legislation doesn't work. Read about it here.
Posted by Social Mange at 10:39 PM No comments: Links to this post

Psst! Wanna see a big one?

Caveat has the goods....
Posted by Social Mange at 10:14 PM No comments: Links to this post

Cows kill far more people than dogs do and the situation was very dangerous, but the parallels between this article and the usual media hysteria of "pit bull" attack struck me as ironic and sadly amusing. The police had to shoot the cow many, many times before it died...it was "staring menacingly", it was "noticeably more aggressive".

Kentucky pet owners, H$U$ is coming for you and your animals

Stop H$U$ in its tracks. Don't let it have one seat at the table, let alone two.
This was in my mailbox tonight.

If you are in Kentucky, or know any one in Kentucky, please forward. The last thing we need, anywhere, is the Humane Society of the United States having any say in animal control issues.

Please contact the Legislative Message Line 1-800-372-7181 and OPPOSE this bill!!!
SB 206 will be heard before the Senate Agriculture and Natural Resource committee tomorrow at 10:00 in room 129 of the annex.
If passed, the bill will give HSUS 2 seats on the animal control advisory board. An amendment may be made to change the seats to members of the Kentucky Animal Welfare Alliance instead of the HSUS. This group is mainly comprised of members of the rescue community. Consider calling if they are in your district. Just click their name for contact info and district represented.

Bill's Sponsor, Senator Tom Buford, contact info at the link. Call him, write him, fax him, tell him to drop this Bill.

The ladies took no prisoners

From what I hear, three very articulate ladies kicked the stuffing out of Ontario's "pit bull" ban on Rogers Cable March 19th. The show should be online on March 20th. Try this link, use the dropdown menu on the right to pick March 19th and see if the show comes up.

AND FIBERALS DROOL!
Posted by Social Mange at 11:17 PM 2 comments: Links to this post

Rambo still in the slammer

Read about it here. The motion concerning Rambo won't be heard until May. The dog has been in custody since Christmas 2007. The Ontario Liberal government is responsible for depriving a citizen of her unoffending property - her dog - and creating unnecessary stress for an unoffending animal, which is cruelty to an animal by the Lie-berals in my mind.

Oooh, I forgot. The Fibs think that shape is destiny. Ya, and I can tell your future from the bumps on your head. Or in the case of the Fibs, the holes. Dammit, have they checked Dalton for a chin? What does that lack say about his destiny?

Perhaps courts could attend to hearing real criminal cases and not have to release the perpetrators for undue delay if they weren't backlogged with bullsh*t cases like this, where no wrong or harm has been done.

This is just another case under the Liberals' unfounded, unjust, vague and shoddy law where the remedy far exceeds any supposed "crime".

Yo, municipalities! The law does not require you to label a dog as a "pit bull". There's no such thing, the remedy as I understand tossed out the label. So, stop labelling dogs with that moniker, send 'em home to be happy and live long lives with their owners, and save us one boatload of money because baloney cases like this will cease.

If Chris Bentley has ten cents worth of sense, he'll get the Fibs to repeal their breed-specific legislation, wipe the cases off the books, free all the dogs to their owners, wipe out some of the court backlog, and we can get on with life in a province that might be less of a hellhole than it is now.
Posted by Social Mange at 10:11 PM 3 comments: Links to this post

Sometimes, ya just have to wonder....

What was reportedly an isolated, unsocialized, untrained, probably sexually intact dog with a history of aggression (reportedly seven prior bites), tethered on a very short leash, no food, no water, not taken out to relieve itself so forced to stay in its feces and urine, while what is probably its mate and its puppies roam the house....kills a child.

Owner of the dog kills the dog for killing the child.

So, a child and a dog are dead due to the dog's owner, who is also the child's father.

This is not and never will be a matter of dog breed or type. This appears to be a combination of cruelty to an animal, irresponsible dog ownership, and negligent parenting.

Read about it here and here.
Posted by Social Mange at 9:44 PM No comments: Links to this post