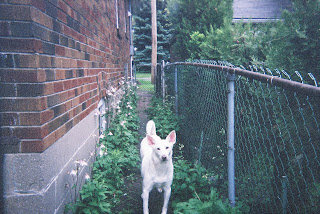 People may wonder why I hate breed-specific legislation so much. It's personal as much as intellectual.

This is a picture of my late and much-missed "pit bull", Sara. She qualified as a "pit bull" under Ontario's unjust, unfounded breed-specific legislation. Why? Because I couldn't prove that she wasn't.

Sara was a shelter dog whom I adopted at roughly 8 months of age. No one knows what happened to her before that but I can make an informed guess, because she was a lunatic when I got her. She was untrained, and grabbed and bit because she was frightened of people. My hands were black with bruise from being grabbed, and I have a scar on my upper lip where she made a lunge for my face. After much, much, much work, feeling exhausted and discouraged because I wasn't seeing any improvement, something incredible happened. Sara got a rose thorn in her paw. Without being called, she came to me - limping, it was a huge thorn - to have me "fix it". We took a big step towards each other that day.

Sara improved greatly over the years, showing her intelligence and her sense of humour (yes, some dogs have a sense of humour). She took everything in stride - foster dogs, cats, foster kittens - with patience. Sara would let foster kittens crawl on her, and helped me train foster puppies; she got the biggest grin on her face when she chastised a foster puppy for urinating in the house, she obviously got a kick out of being the "boss dog". She was a wonderful companion. Sara passed away in 2007, and I miss her every day.

Ontario's vague and shoddy BSL has killed approximately 12,000 dogs, adults and puppies alike, solely because of the way they look, not because of their behaviour. If some dog-hating moron had called my dog a "pit bull", I would have become a second-class citizen in Ontario and had no way to defend my Sara.

Rest in peace, Sara. At least you didn't have to be torn from your home and family to die alone in a shelter, condemned just because of the way you looked.
Posted by Social Mange at 8:41 AM 1 comment: Links to this post