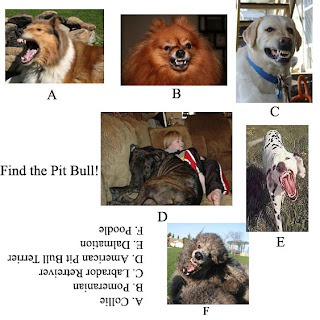 Someone give this to Mississauga Animal Control....
My respect and credit to Katie Crabtree for this new "find the pit bull" game.
Posted by Social Mange at 10:58 PM 3 comments:

UPDATE 1/17/08: The City of Mississauga is sending around a blah-blah-blah form letter with a lot of bumpf in it.

The form letter from the City of Mississauga blathers about concern over liability for a dog bite. If the City were concerned about liability, it would never adopt out any dog. In fact, no municipality would rehome dogs if it were concerned about liability. Any dog can bite; breed is irrelevant. If liability were such a concern, municipal Animal Control departments would be nothing more than slaughterhouses for dogs.

I say that the City has the honourable option of declaring the puppy a mutt since no one on this earth can prove what he is, and returning him to his owner with a caution to keep him confined and safe.

I must admit that I burst out laughing at the claim that this dog is part American Staffordshire Terrier. Any claim that this dog is purebred or part purebred is because the owner was misled by the backyard breeder who sold her the puppy, or wishes to believe that her flea-market dog is part purebred. Also, there is a minute number of purebred AmStaffs in Ontario; you're going to tell me that a backyard breeder has a purebred AmStaff? Ya, and the moon is made of cheese.

Is the Mississauga Animal Control department pursuing the backyard breeders and puppy millers that reside in Mississauga and sell dogs at flea markets and pet stores?

As for the "substantially similar" claim: After more than 40 years around dogs, my vote is that the dog is part Labrador Retriever, part Doberman. The red coat and nose are Dobe-ish, the square head and bulky body are Lab. Who is to say I'm wrong?

There is nothing to prove that this dog is anything other than a dog. And a puppy at that. Please remember that the former Attorney General Michael Bryant, the architect of Ontario's breed ban, was unable to identify the American Pit Bull Terrier in a series of pictures of purebred dogs.

No breed is likelier to bite a human than another based on breed alone; it is a matter of individual owner responsibility and training. It is the human factor that determines whether one dog is likelier to bite than another. From all reports, this puppy has not shown any evidence of aggression. Karen Delise has done sterling research into the issue of dog bites and attacks, published in herbook Fatal Dog Attacks. Her research into over 30 years of dog attacks identified three factors that appear to contribute to canine aggression towards humans. None of these are breed. The prime cause for the three factors is human – the irresponsible owner.

**Permission to crosspost far and wide**

A case is unfolding in Mississauga, Ontario that needs your attention. Here's a quick summary of what's happening:

On Christmas Day, a gate was left open and a pup named Rambo decided to go exploring. Nothing too unusual there, it happens sometimes.

His owner, a 20-year-old woman, was worried sick.

The pup was picked up by Animal Control and instead of being reunited with his tearful young owner, was slated for death because the ACO thought he was a 'pit bull'.

Officials are on record as saying that if she just signs the dog over so they can kill him, they won't charge her with having an illegal 'pit bull'.

She would rather not have her mixed breed pup killed so she plans to fight them.

The AC spokespeople are emphasizing the fact that she can't afford a lawyer and that she can't win a case against them so she may as well just give up. From the stories, it appears they haven't actually charged her with anything yet and she wants to save her dog's life.

PLEASE VOICE YOUR OBJECTION TO THIS SITUATION IN AN EMAIL OR LETTER TO THE CITY OF MISSISSAUGA. BE BRIEF, POLITE AND FIRM. ASK THEM TO RELEASE THE DOG OR SEND THE DOG OUT OF ONTARIO. USE A SUBJECT LINE REFERENCING 'RAMBO' SO IT IS CLEAR THAT YOU ARE WRITING ABOUT THIS INCIDENT. IT ONLY HAS TO BE A COUPLE OF LINES LONG - INCLUDE YOUR NAME AND CITY.

If you can send paper instead of e-mail, even better. A fax machine can't be set to filter messages, and Canada Post doesn't discriminate by subject.

If you e-mail, change the (at) to the @ symbol. The (at) is to fool bots looking for e-mail addresses.

Here are the addresses for the City Councillors and the Mayor of Mississauga: