UPDATE: Lassie Get Help has a nice take on Toronto's Gulag for Dogs, read it here.

The owners of Munchie, Sheila Yeung and Angela Feng, were working on Munchie's appeal and its financing when Toronto Animal Services killed Munchie. They weren't even told that Munchie had been killed; a reporter told them when he called them for their reaction.

This is an outrage. The case against Munchie was not proven; there is no record, no proof of any bite to the complainant or his dog. Cheryl Smith, renowned for her knowledge of dog behaviour, found Munchie non-aggressive. Munchie and his owners had not had all their days in court. Word on the street is that Toronto Animal Services abused Munchie by handling him only with a catchpole, never letting him outside and never allowing his owners to visit him. From beloved pet with a home, to a tormented captive in a municipal pound. From a report in the Toronto Star, Toronto Animal Services killed Munchie well in advance of the end of his appeal date.

This is an outrage. A case never proven. A dog seized and killed by Toronto Animal Services on an unproven case, without due process for the owners. All because of the bullsh*t McGuinty and Bryant law.

Write the editors of local and national papers and let them know what you think of this injustice, this outrage. Make sure you send to only one at a time so your letter doesn't go into a spam filter, and that your full name, address and phone number are on the letter.

Tell Mayor Miller of Toronto what you think of this case:

Swamp them. Let them know we're angry, and we're not going to be quiet or go away.
Posted by Social Mange at 2:01 PM 2 comments: Links to this post 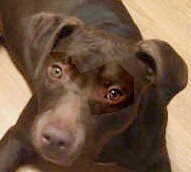 ...may he be happy and whole in Heaven, while Liberal politicians who voted for his death with their breed-specific legislation can rot in Hell.

Are the Ontario Fiberals using our tax dollars to pay bounties for dead dogs, to try to bolster their BS law? You've got to wonder.

'Nuff said.
Posted by Social Mange at 2:18 PM 2 comments: Links to this post

To ALL responsible dog owners

"I was just looking at my dog, Jack.

He has a short coat, a short muzzle and a deep chest. He's about knee-high. I think he's a brown Labrador mix but who knows? I got him from a friend when he was just a pup. There was a case in Toronto just last week where a dog that looks like Jack is at the pound because animal control thinks he's a 'pit bull'. I am nervous when I take him for a walk these days, people stare at us and make comments.

I worry a lot, being a dog owner living in Ontario. Is my dog safe? Can I be sure? Well, not really because nobody seems to know which dogs fit the law and which dogs don't. And that's one of the big problems with Ontario's dog ownership ban. Every dog and no dog is a 'pit bull'."

--Ontario citizen, received via email
*
Breed banning is spreading across the continent. Mandatory sterilization and complex ownership rules complete the hat trick used to limit the breeding and ownership of dogs. Using outright lies and distortions, the anti-pet owner groups have been busy. Their aim is openly stated: they want to end the domestication of animals, including dogs.

In Europe there is mounting pressure to restrict breeding and pet ownership. Unfortunately, what starts there often comes here - as we saw with the infamous Dangerous Dogs Act.

California, Ontario, Ohio, Illinois, Louisville, Albuquerque - with each passing day another town or district is talking about or enacting a new law targeting dog owners and breeders.

*
The Dog Legislation Council of Canada (DLCC) in partnership with other Banned Aid Coalition members, has been one of the driving forces in the constitutional challenge to Ontario's confusing legislation.

We realize that our goal, while simple, may not be clear:

We are determined to fight for the rights of every dog owner across the country. We oppose breed bans, mandatory spay/neuter laws, elitist property requirements, limit laws and other anti-breeder, anti-owner legislation.

We know that even some dog owners have fallen prey to the media hysteria and political lies that allowed the passing of the Ontario law and others like it. We know that myths about pet overpopulation, uncaring profit-driven breeders, dangerous breeds and more are widely believed.

We are fighting the Ontario ban through the courts, not because of a breed or mixed breed but because the Ontario government has taken away the rights of people who have done no wrong - people like us.

Dog owners in Ontario, regardless of their pet's breed, are now subject to warrantless entry and unreasonable search and seizure. They can be charged if a dog is considered to be 'menacing' - with no definition of it in the law. They are open to mischief and harassment.

Owners of some dogs are now subject to the above plus restrictions on mobility, presumption of guilt, reversal of the burden of proof in a hearing, discrimination, intimidation and stigmatization. How long will it be until more breeds are added to the restricted or prohibited lists? As we have seen, the Ontario law already casts a very wide net indeed.

The precedent for the banning of purebred dogs and dogs that are 'substantially similar' in appearance has been set into provincial law and was upheld in a recent Superior Court decision. Three purebreds, two CKC-recognized, one recognized by other registries, are restricted and prohibited in Ontario. As a dog owner, that should alarm you as much as it alarms us.

The case is extremely expensive and we need your help. We cannot fund a constitutional challenge against an opponent with bottomless pockets (the Ontario government) alone.

To date, we have raised and spent over $525,000 on this legal action and our costs continue to mount as we prepare for the Appeal.

The Dog Legislation Council of Canada is an all-volunteer, all-breed, not-for-profit corporation with members in every province. All funds raised, including membership fees, are put directly into the legal fund.

We need your contribution now to carry on the fight for dog owners' rights. Please help us win the battle to protect dog ownership in Canada.

It's time for dog owners to stand together and speak with one voice.

It's time to say 'No!' to anti-dog owner legislation.

You can contribute in one of four ways:

2. Send a cheque or money order payable to Ruby & Edwardh with
"Banned Aid - In Trust' on the memo line to:
Ruby and Edwardh
Barristers and Solicitors, 11 Prince Arthur Avenue, Toronto, ON M5R 1B2

4. By online banking transfer to treasurer @ doglegislationcouncilcanada.org (no spaces)

Thank you for your support - together, we can win this.

Want to be heard? Join us! http://www.doglegislationcouncilcanada.org/membership.html
Posted by Social Mange at 11:42 PM No comments: Links to this post

Now I understand the weather in the Big Smoke....

...George Smitherman, an Ontario Fiberal, apologized, so Hell must have frozen over.

What a dweeb. I suggest that he sit in the soaked diaper for a couple of days until he has urine scald, and then he will perhaps have an inkling of the physical pain seniors suffer because of inadequate care. That won't, of course, cause Furious George the emotional trauma and damaged pride that seniors suffer, having to use diapers and sit in their own waste because the Fiberals have ignored the issue of inadequate care for seniors.

Somebody stuff the damm diaper in Furious George's mouth, before he yet again says something equally dim.
Posted by Social Mange at 3:40 PM 1 comment: Links to this post

..and KC Dog Blog has the scoop. Read it here.

H/T to Caveat.
Posted by Social Mange at 11:00 PM No comments: Links to this post

OK, I have had it up the wazoo with people waving flags and trying to restrict my rights on the basis that their "precious children" might be harmed.

Latest bunch of crackpots want the television show Dexter taken off the air, because it's "too violent for their children". I love Dexter. Yo, squealers, get off your fat duffs and turn off the set. The program is on at 10 at night, what are your kids doing up? You're a lousy parent if you can't have them in bed at a decent hour, or control their television viewing. Don't try to cut off a great program because you're too freakin' lazy or incompetent to do your job.

Brings to mind all the crackpot "parent" groups down in the U.S. that have suddenly sprung up on the 'net, screeching for breed-specific legislation. Methinks me smells the stink of a particular city official in all this...it's his style, just like the "private" online group he had (I heard he got royally reamed for doing it on the taxpayers' tick). These "parent" groups (I question how many of them are actually parents, how many are nutbars, and whether they may all be one person *grin*) don't let the facts get in their way, nosirree.

When did the population's overall IQ drop so many points?
Posted by Social Mange at 10:23 PM 3 comments: Links to this post

Good stuff on KC Dog Blog and Lassie Get Help this weekend.

KC Dog Blog has the usual terrific weekly roundup. Lassie Get Help has the story of Roary, a lifesaving Staffy that defended its young owner against a venomous snake (no, not a politician), getting bitten in the process, and links to some wonderful vids.
Posted by Social Mange at 5:35 PM 1 comment: Links to this post